Creamy and smooth peanut butter and peanuts can trigger deadly reactions in those with allergies.

by Edwin Kim, University of North Carolina at Chapel Hill | The Conversation

No one I knew had food allergy, let alone peanut allergy when I was a child. I grew up at a time when peanuts were given freely on airplanes, and there was no such thing as a peanut-free table at school. Fast forward to today and the world has changed, with food allergies taking on almost epidemic-like proportions.

I am an allergist and became interested in food allergies in 2004 after spending a month working with Dr. Wesley Burks, one of the world’s leaders in food allergy research, at the Duke Allergy Clinic. I was fascinated that a simple peanut could cause the immune system to go haywire. That knowledge inspired me to spend the next six years of medical training learning as much as I could about what triggered food allergies and how to treat them. This paid off in 2011 when I was invited to join the allergy faculty at the University of North Carolina. Just as I was getting settled into my new life as a doctor and researcher for food allergy, my world changed again.

On a Monday morning in September 2013, I gave my nine-month-old son Elliott peanut butter on toast for the first time, and then it happened. He had a severe allergic reaction: head-to-toe rash, vomiting, and coughing. Suddenly food allergy was real to me in a way I could not have ever imagined.

Like many other parents, my first emotion was denial. When I finally accepted that he was now one of the estimated 1.6 million kids in the U.S. who have peanut allergy, I hoped he would just outgrow it. Unfortunately, for peanut allergy, almost 80% of peanut-allergic kids hang on to it for life. So just as I had advised many families at my allergy clinic, I went to the pharmacy to get our EpiPen and reentered the world hoping to never have to use it.

Professionally, things have changed for me as well. I’ve spent the last 10 years trying to develop a therapy that can protect kids with food allergies from having severe allergic reactions or even dying. Finally, after years of testing in clinical trials, I’m hopeful that small drops of a peanut solution may bring us one step closer to making this a reality.

Trying to find a cure

Over the past 10 years, multiple studies have shown that oral immunotherapy using peanut flour can work. The Aimmune Therapeutics company completed the largest peanut oral immunotherapy study in the world. Also during the last decade, DBV Technologies developed its unique peanut patch and completed a multinational study of hundreds of peanut-allergic kids. (Disclosure: I consult for both of the companies that sponsored the studies.)

The Aimmune Therapeutics study of the oral treatment showed that the peanut flour protected 67% of the allergic kids from having allergic reactions after eating up to three and a half peanuts. Before starting treatment, less than one-third of a peanut would have triggered a reaction. But actually taking the peanut flour treatment required special timing and preparation that made it hard for some of the families. In addition, side effects like rash, stomach aches, and vomiting prevented 12% of the kids from completing the treatment.

In contrast, the DBV peanut patch study showed that sticking the patch to the skin once a day was simple, with over 98% of patches successfully applied. The patch caused some redness, but only 2% of the kids had to stop the treatment early. However, only 35% of the kids seemed to benefit from the patch, and they were able to tolerate only one and a half peanuts.

A new option for peanut allergy

At UNC, my colleagues and I have been developing an alternative treatment called sublingual immunotherapy, or SLIT for short, using liquid peanut drops that are taken under the tongue. In our recently published long-term study of peanut SLIT, kids put two milligrams of peanut solution – about 1/150th of a peanut – under their tongue for two minutes daily. They continued this therapy for between three and five years, and afterward, almost 70% of the kids were able to safely eat two and a half peanuts without suffering an allergic reaction. These drops have been tested by a multi-center NIH group – called CoFAR – and a study directly comparing the drops with the peanut flour was done at Johns Hopkins. 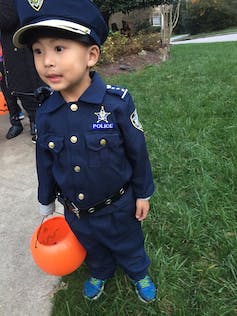 Elliott embarks upon a safe and happy Halloween. He is not actually on any of the described treatments at this time.

This is at least 10 times the quantity it would take to trigger an allergic response to an accidental peanut. One-quarter of the kids in our trial finished the entire test, which involved consuming the equivalent of 17 peanuts, without any symptoms at all. About 5% of the more than 75,000 doses caused side effects, but most of them were just itching in the mouth that went away on its own. Thankfully, none of the kids needed epinephrine to treat any side effects.

Peanut allergy is not the end of the world, but it is life-changing. My son Elliott does not want to eat peanuts, but he does want to sit with his friends at lunch and eat that birthday cake at the party and go trick-or-treating with all the other kids.

It is exciting that after all this time, treatments are coming. Whether it’s peanut flour or the patch, or now possibly our liquid peanut SLIT drops, he may soon be able to do these things without worrying, just like all the other kids.

[ You’re smart and curious about the world. So are The Conversation’s authors and editors. You can read us daily by subscribing to our newsletter. ]

Edwin Kim, Assistant Professor of Medicine and Pediatrics and Director of the UNC Food Allergy Initiative, University of North Carolina at Chapel Hill

This article is republished from The Conversation under a Creative Commons license. Read the original article.

The Conversation is an independent, nonprofit publisher of commentary and analysis, authored by academics and edited by journalists for the general public. We publish short articles by academics on timely topics related to their research.

Our mission is “to promote truthful information and strengthen journalism by unlocking the rich diversity of academic research for audiences across America.” EVOX Television 1 week 3 days ago
What's that huge expense you use once and never again? Yep, #wedding attire. Here's how to source is #sustainably:… https://t.co/MUyyaFHOJB

EVOX Television 1 week 5 days ago
#parenting is hard work no matter what—can you keep your #sustainability and #greenliving commitments while you're… https://t.co/SMoUKXxHtI